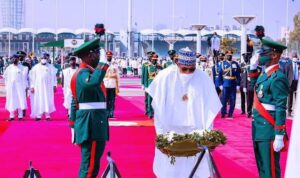 President Muhammadu Buhari led other senior government officials to the National Arcade in Abuja for the Wreath Laying Ceremony, which marked the culmination of the 2023 Armed Forces Remembrance Day celebration.

The event, which takes place on January 15, 2023, honors the nation’s fallen heroes and is marked across the federation with activities such as religious services, parades, and wreath-laying ceremonies.

The President was ushered onto the saluting dais for the National Salute shortly after arriving at the National Arcade at 10:05 a.m.
He also inspected the Guards of Honour, accompanied by Brigade of Guards Commander Major General Muhammad Takuti Usman, before proceeding to the Cenotaph for the Wreath Laying Ceremony.

Others who laid wreaths included the Defense and Federal Capital Territory (FCT) Ministers, Major General Bashir Magashi and Mallam Muhammed Musa Bello, respectively; the Chief of Defence Staff, General Lucky Irabor, and the service chiefs, as well as the Inspector-General of Police, Usman Alkali Baba; representatives of members of the Diplomatic Corps; and the Chairman of the Nigerian Legion and a widow of a fallen officer.

During the event, the President also performed the symbolic release of white doves from cages.

The wreath-laying ceremony in 2023 will be President Buhari’s final as Commander-in-Chief.

Members of the Federal Executive Council were also present, including the Secretary to the Government of the Federation, Mr Boss Mustapha; the President’s Chief of Staff, Professor Ibrahim Gambari; the National Security Adviser (NSA), Major General Babagana Monguno (rtd), other ministers, and Permanent Secretaries, among others. 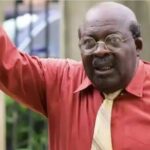 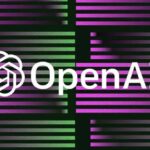