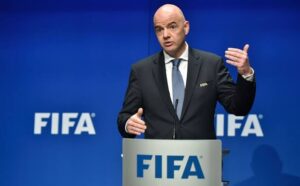 Following Russia’s invasion of Ukraine, FIFA has barred the country from participating in any international competition, including World Cup qualifying games in 2022.

The ban would apply to the country’s men’s and women’s national teams, as well as any club teams competing in FIFA or UEFA events, FIFA and UEFA declared in a joint statement. 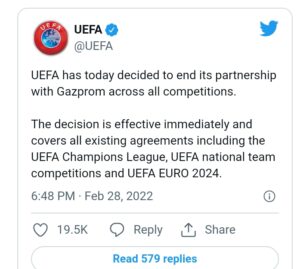 “On such important matters, these decisions were taken today by the FIFA Council Bureau and the UEFA Executive Committee, respectively the highest decision-making bodies of both institutions,” the statement stated. “Football is completely united here, and we stand in complete solidarity with all those who have been affected in Ukraine.” Both Presidents believe that the situation in Ukraine will considerably and quickly improve, allowing football to resume its role as a vector.

Poland, Sweden, and the Czech Republic have all stated that they will not play Russia in their forthcoming World Cup qualifying matches. Other international sports federations had previously been urged by the International Olympic Committee to prevent Russian athletes from partaking in all global athletic events whenever possible.

UEFA also stated that it had ended its cooperation with Gazprom, a Russian state-owned energy firm, which had reportedly paid the European governing body $40 million each year. After taking the first step of removing Gazprom’s name from the front of its shirts, German club Schalke broke ties with the Russian company.

Russian teams will be barred from participating in international events indefinitely. The 2022 World Cup will be out in November in Qatar, while the 2022 Women’s European Championship will take place in England in July. 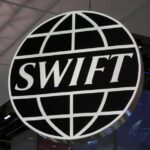 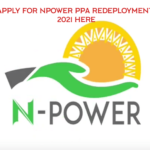