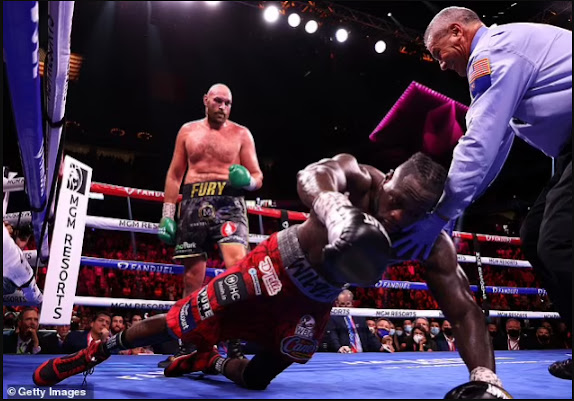 Following his brutal knockout defeat to Tyson Fury in Las Vegas, Deontay Wilder was taken to the hospital.

In a fight that could be a contender for fight of the year, the American was knocked down three times. After Wilder was heavily downed for the third and final time in the 11th round, referee Russell Mora quickly stopped the fight.

Wilder was defeated for the second time in a row by the Brit, who retained his WBC title, and the American will now undergo precautionary testing in the hospital.

Wilder, 35, will not be held overnight, according to his manager Shelly Finkel, who claims he is in good condition.

Deontay is OK and will not be staying at the hospital overnight,’ he said.

After the fight, Wilder spoke up, saying that he had no idea what went wrong.

‘I gave it my all, but it wasn’t enough tonight,’ he admitted. ‘I have no idea what happened.’ I knew he accomplished certain things in training, and I also knew he didn’t weigh 277 pounds to be a ballet dancer.’ He approached me to lean on me and rough me up, and he succeeded.’