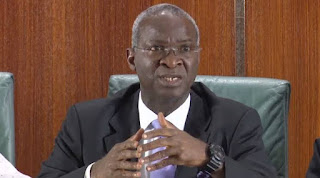 The Federal Government has promised to start paying compensation to Benue residents who have been affected by the federal highway’s development in Abuja-Keffi-Makurdi next week.
In a meeting with contractors working on the project and representatives from the Benue government on Wednesday at Government House in Makurdi, the Minister of Works and Housing, Babatunde Fashola, gave the assurance.
The minister, who was represented by Director of Works Ishaq Mohammed, expressed concern for the suspension of work along the Benue axis due to unpaid compensation to people whose farms and homes were affected by the construction.
Because the project was financed through a bank credit line and had a limited time, the minister stated that it was important that construction resume.
He stated that a series of meetings between the federal government and community leaders were held in the hopes of receiving compensation sooner, but to no avail.
The youths, according to Anagende, were angered by the road project’s loss of their livelihoods without accompanying compensation.
Gov. Samuel Ortom warned against acts of lawlessness in his address, saying that his administration would never condone those who threaten people under whatever pretense.
Traditional rulers were charged by Ortom to take control of their lands and collaborate.
” I will deal with those threatening lives and property, let me know whenever there are threats to lives and property. But at the same time, I will not allow my people to be short changed in the process,” he said.