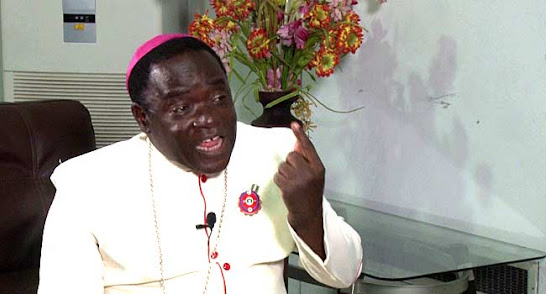 Mathew Kukah, the Catholic bishop of Sokoto diocese, has accused President Muhammadu Buhari of being helpless or uninterested in dealing with bandits and other criminals who carry out attacks in the country’s northern region.

Kukah said in his speech before the United States Congress Commission that the President has “blatantly pursued a nepotistic agenda and measures that indicate very clearly his preference for men and women of his faith.”

The Catholic Bishop also said that the persecution of Christians in Nigeria, which has been going on for a long time, has escalated in the fast 10 years, with extremists attacking Christian schools in the north, convert girls to wives, sex slaves, and spies while indoctrinating them.

“Armed bandits, kidnappers, and other thugs infiltrate the north, and even the entire country, terrorizing communities at will. The government’s alleged inability or unwillingness to deal firmly with these individuals has added to the confusion.

“The contradiction here is that the President has openly pursued a nepotistic agenda and policies that show his clear preference for men and women of his faith. For the first time in Nigerian history, all three branches of government — the President, Senate President, Speaker, and Chief Justice – are headed by Muslims. All of these gentlemen are excellent gentlemen, but that isn’t the goal.

The conflict between Christians and Muslims has become worse. This is the first time something like this has happened. The narrative of Leah Sharibu proves that there is a link between people’s beliefs and their circumstance in many cases. Some of our pastors in the north were killed in 2020.

Extremists kidnapped our children and forced them to convert to Islam. The fact that we live in a democracy with weak structures and institutions is significant. This is a matter of life and death. As a result, we require practical assistance that will help both ourselves and our children.”