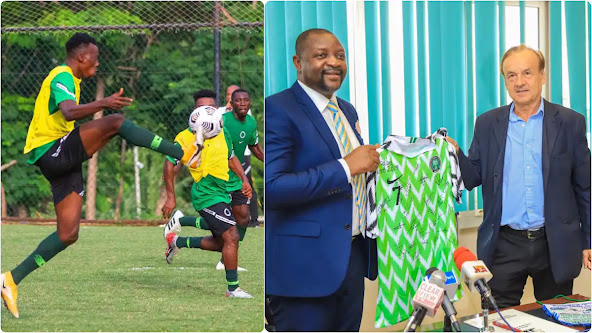 Sunday Dare, the Minister of Youth and Sports Development, has slammed Super Eagles head coach Gernot Rohr for his “unfair treatment” of NPFL players, advising him to concentrate on his job.

Rohr has been criticized for not inviting home-based players to the national team since taking over as head coach.

Since taking over as coach of Nigeria’s national team, Rohr, 68, has depended heavily on foreign players, and he recently criticized the home-based team, which will face Mexico in an international friendly at the Los Angeles Coliseum this weekend.

Austin Eguavoen, not Rohr, will be in charge of the home team, which has been met with displeasure by the Sports Minister.

Last year, Rohr signed a new two-year contract, and one of the terms of the agreement was that he incorporate more domestic players in his plans.

Only Enyimba’s Anayo Iwuala has been in recent Super Eagles games, according to Rohr, who claims that all of Nigeria’s greatest players are in Europe.

After visiting the home-based players during their Abuja camp, Dare expressed his disappointment with Rohr.

Dare has called on the Nigeria Football Federation (NFF) to speak with Rohr about his treatment of NPFL players.

“Rohr’s approach toward home-based players is unacceptable; it is detrimental to our football growth, and I urge on the NFF to summon him (Rohr),” Dare said.

Dare said, “Rohr needs to shut up and complete the work of his contract; he talks too much.”