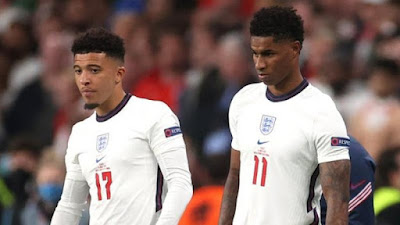 It was also criticised by Prime Minister Boris Johnson and the Football Association.

After the 3-2 shootout loss, all three players were harassed on social media for missing penalties.

The abuse is being investigated by the Metropolitan Police, who have stated that “it will not be condoned.”

“It’s just not who we are,” Southgate said.

“We’ve demonstrated the strength of our country when we get together and share that energy and positivity.”

“It’s not a question of players refusing to take penalties; it’s my decision.”

England had reached their first final in a major tournament since winning the World Cup in 1966 and, despite taking the lead against Italy, drew 1-1 after extra time before a penalty shootout.

“This England team deserve to be lauded as heroes, not racially abused on social media,” said the prime minister.

“Those responsible for this appalling abuse should be ashamed of themselves.”

England’s players have taken a knee before games at the Euros to highlight the fight against racial inequality.