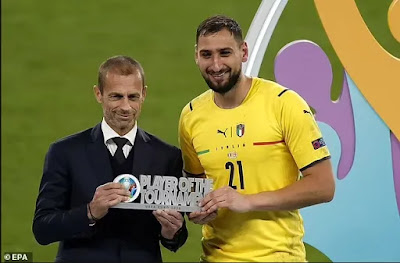 After his penalty-saving heroics helped Italy win England in the shootout at Wembley on Sunday night, Gianluigi Donnarumma has been awarded Euro 2020 Player of the Tournament.

To help Italy win the trophy, the 6’5″ and soon-to-be Paris Saint-Germain goalkeeper kept away Marcus Rashford and Jadon Sancho’s efforts, as well as a winning stop from Bukayo Saka.

He also kept out two spot-kicks in the semi-finals against Spain.

After Peter Schmeichel’s crucial role in steering Denmark to triumph in 1992, he is the second goalkeeper to win the award. After helping AC Milan return to the Champions League after an eight-year absence, Donnarumma was crowned Serie A’s Best Goalkeeper.