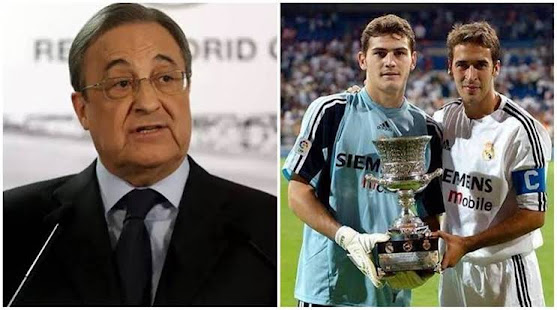 After graduating from the club’s academy, Casillas and Raul spent a combined total of 43 years at the club, becoming legends.

They have a combined total of seven La Liga titles.

Raul left the Bernabeu in 2010, moving to Schalke after scoring over 300 goals for the Spanish giants, while Casillas was forced to leave the club after more than 700 appearances.

Perez blasted the two club legends in a secret audio from a 2006 conversation, which has just surfaced.

Perez resigned from his first term as president six months earlier, after allegations that he had focused too heavily on brand appeal rather than footballing success.

“He isn’t a Real Madrid goalkeeper. He isn’t, and he hasn’t ever been. According to El Confidencial, Perez stated of Casillas, “It has been the greatest failure we have had.”

“What happens is that they [the fans] adore him, they love him, they talk to him. I don’t know why they defend him so much. “ Well, it’s one of the great frauds, the second is Raul. The two great Real Madrid frauds are Raul first and Casillas second.” Perez then turned his anger towards Raul, who he accused of “destroying” the club, blaming him for his departure as president.

“[Zinedine] Zidane is a fantastic person. And then there’s [David] Beckham and Ronaldo. Others, on the other hand, believe that… Let’s see what happens. Perez stated, “Raul is a nasty person.” “He considers Madrid to be his, and he makes the most of it by developing everything for his own gain. He and his representative. They are to blame for Madrid’s poor performance.

“Look, I left, among other reasons, because of him. He is a negative guy, he is destroying Madrid.” Perez has now com out to hut back at the publisher of the audio recording, claiming that the recording has only been published to discredit him in the face of the European Super League scandal. “Given the news broadcast in El Confidencial, in which phrases attributed to me are reported, I believe it is true. “The reproduced phrases are pronounced in conversations clandestinely recorded by Mr. Jose Antonio Abellan, who has been trying to sell them for many years without success. “It is surprising now that, despite the time that has elapsed, the newspaper El Confidencial reports them today. “They are single phrases of conversations taken from the broad context in which they occur. “For them to be reproduced now, after so many years have passed since those conversations took place, is I understand due to my participation as one of the promoters of the Super League. “I have put the matter in the hands of my lawyers who are studying the possible actions to take.”