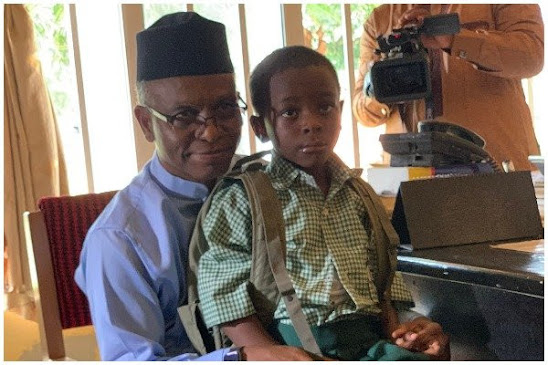 Nasir el-Rufai, the governor of Kaduna state, has said that he withdrew his son, Abubakar, from a public school in the state because bandits were threatening to abduct him.

Abubakar was enrolled in the Kaduna Capital School, a state-run public school, by the governor in September 2019. He had stated that sending Abubakar to a public school was a way for him to demonstrate his commitment to rectifying the problem.

Governor El-Rufai, however, said in an interview with BBC Pidgin on Thursday that he has “temporarily” withdrew Abubakar and one of his daughters, who he had also enrolled in the school when she was six years old. Security authorities advised them to leave the school when they got information that the children were being targeted by bandits, he said.

He stated that despite his confidence in the school’s security team, he withdrew his children from the school so that they would not endanger other students.

“Both my son and daughter are enrolled in school because his sister turned six and we needed to enroll her.

However, for the sake of the school’s security, we had to temporarily remove them because we received intercepts from at least two groups that are planning to attack the school to kidnap my son.

They will not succeed, I believe, since there will be sufficient security in place to prevent it, but other children may be put in danger.

We have no notion what kind of weapons they’ll bring.

I have refused to pay ransom to bandits, and at least three groups of bandits have been arrested planning to abduct my son at Kaduna Capital School. “If they catch my son, I will say I will not pay ransom?” he stated.

Abubakar is currently being homeschooled, according to the governor. He went on to say that his son will take his exams at Kaduna Capital School.