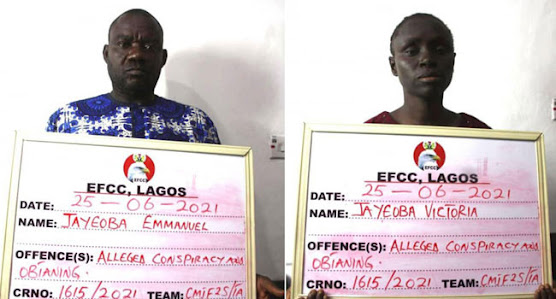 Adewale Daniel, Marketing Director of Wales Kingdom Capital Limited, is the son of Emmanuel and Victoria Jaiyeoba, who were arrested at their home in Ibadan, Oyo State.

They are accused of conspiring with their son, who is currently at large, to scam unsuspecting people through a Ponzi scheme disguised as FX trading.

Emmanuel, who is a Director at Wales Kingdom Capital, has five bank accounts and received a total of N18, 397, 913. 67 before his arrest, according to the investigation.

Further research revealed that the second suspect, Victoria, has six bank accounts through which she has received fraudulent transactions totaling N916, 607, 715.

They will be charged to court soon.