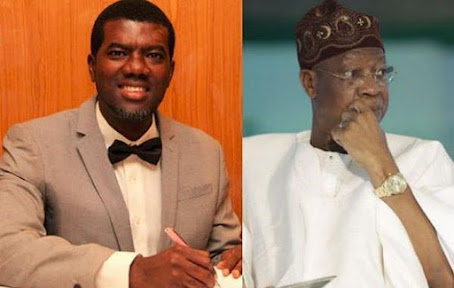 Reno Omokri has slammed Lai Mohammed, the Minister of Information and Tourism, accusing him of sabotaging President Muhammadu Buhari’s administration.

Omokri was responding to Lai Mohammed’s recent remarks on the arrest and prosecution of renowned church overseers like Pastor Enoch Adeboye and Williams Kumuyi for disobeying the FG’s Twitter ban.

While reacting to Pastor Enoch Adeboye of the Redeemed Christian Church of God, RCCG, defying Nigeria’s Twitter ban, Lai Mohammed said the Attorney General of the Federation, Abubakar Malami, has the ability to pick who to prosecute.

When asked if Adeboye will be prosecuted for using Twitter, he stated this in an interview with BBC Africa Focus on Monday night.

Recall that Adeboye cited Article 19 of the United Nations’ Universal Declaration of Human Rights to justify his usage of Twitter (UDHR).

The RCCG General Overseer stated in a tweet that the church is located in over 70 nations throughout the world, thus the need to continue tweeting.

However, Mohammed stated that Nigerians who used Twitter after the ban, including Adeboye, would be prosecuted.

And reacting to Lai Mohammed’s comment, Omokri said Lai Mohammed will destroy the Buhari government with his mouth more than Buhari’s enemies.

“He has succeeded in alienating Nigerians from their government. He is meant to be an Image-maker, but has ended up as a damage-maker,”