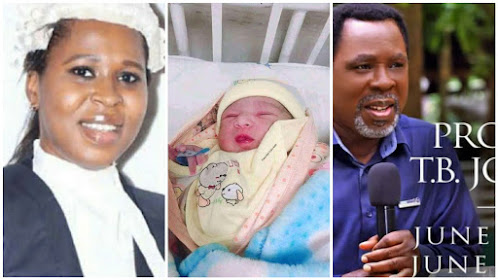 Daughter of the founder of Synagogue Church of All Nationa (SCOAN), Prophet Temitope Balogun Joshua better known as TB Joshua, has welcomed a new baby on her father’s posthumous birthday.

Serah Oyindamola Joshua gave birth to her son on June 12th, 2021, her late father’s birthday. Nigerians were shocked to learn two weeks ago that the cleric had died suddenly while preaching to his audience. On June 12th, he would have turned 58 years old. Evelyn Joshua, TB Joshua’s wife, revealed that she found him dead in his office chair.
Sarah Joshua welcomed her son on Saturday with her Tanzanian husband, Brian Ovin Moshi, in a recent development that serves as a blessing despite the suffering. On Wednesday, December 16, 2020, the couple married in Lagos, Nigeria.