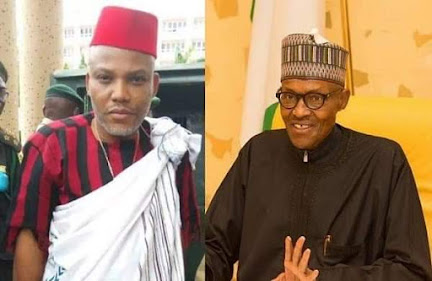 In a speech on Thursday, the Indigenous People of Biafra (IPOB) leader accused Buhari of cheering Fulani militants, robbers, and kidnappers.

Kanu made the comment in reaction to a N110 million ransom demand from robbers for pupils at the Salihu Islamiyya School in Tagina, Rafi Local Government Area, Niger.

The bandits reportedly called the school’s headmaster, Alhaji Abubakar Alhassan, to make their demands known, threatening to kill the students if their demands were not met by Tuesday midnight.

Kanu raised objections, questioning why Buhari would prevent IPOB from demanding justice while robbers, terrorists, and kidnappers are pampered.

“Look at the craftsmanship of the same #Fulani folks lecturing us all about insecurity and threatening genocide in the East,” Kanu stated in a tweet.