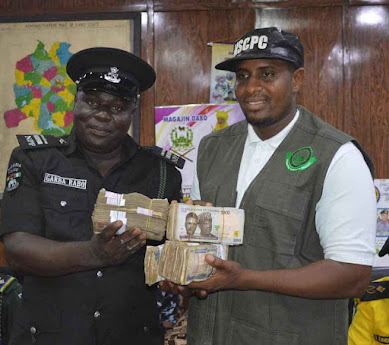 After rejecting bribes from fake drug dealers in Kano state, a police officer and another official received a prize of N1 million.

Inspector Rabo and Alkasim had received information that expired products worth billions of Naira were being kept in a warehouse, as you may recall. The task force squad raided the warehouse, where a bribe of N1 million was offered. They turned down the offer, seized the expired products and money as evidence, and arrested the suspects.

The N1m was contributed by Police Community Relations Committee (PCRC) Zone 2 Command Onikan Lagos, France Chapter, according to the command’s spokesperson, DSP Abdullahi Haruna Kiyawa, who verified the latest development in a statement made on Monday, May 31.

“On the 31st of May, 2021, Commissioner of Police, Kano State Command, CP Sama’ila Shu’aibu Dikko, fsi handed over the sum of One Million Naira (N1,000,000.00) to Inspector Garba Rabo of the Command’s Department of Operations and Jamilu Buhari of the Kano State Consumer Protection Council (KCPC),” according to the statement.

Chief Bashorun Omotayo Oluwasegun, in a letter of appreciation given to the Command and signed by the chairman, PCRC Zone 2, Onikan, Lagos, France Chapter, stated.