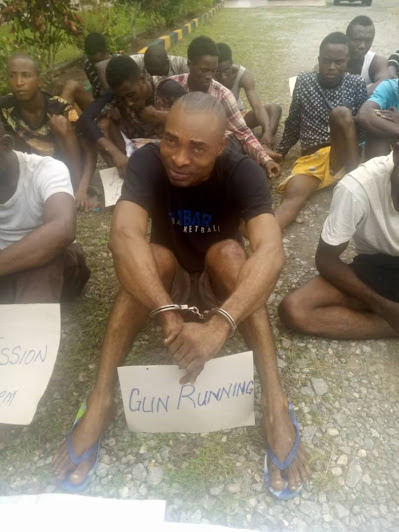 Inspector Nathaniel Manasseh of the Cross River State Police Command has been arrested for alleged gunrunning and renting his riffles to known criminals.

The Inspector, who was paraded with other suspects at the state police headquarters in Diamond Hill, Calabar, on Tuesday, June 22, was implicated in gunrunning in Cross River and Imo States and had not been able to account for his activities.

Mr. Sikiru Akande, the State Commissioner of Police, told reporters that residents of the state should help the police by providing useful information that might lead to the arrest of criminals.

“In the area of security, Cross River is regaining its former glory. In reality, we continue to be Nigeria’s most tranquil state, and nothing can shake our commitment.

Our success today is not unconnected to the corporation enjoyed by well-meaning citizens, vital security stakeholders, and corporate entities that meet on a regular basis to reevaluate our performance thus far and the need for improvement, which has led to what you see today,” Akande remarked.

“I want to simply state that for the police to function effectively and efficiently in any developed society, citizen participation, collaborative partnership, and the community’s willingness to continually equip the police with useful information that can prevent unpleasant occurrences are all required,” he said.

According to the CP, those seized include an Inspector of Police who regularly rents out his riffles to notorious criminals and is a member of a gun crime syndicate.

The Inspector denied being a gunrunner to reporters, alleging that he was charmed and robbed of many AK-47s, as well as a car.