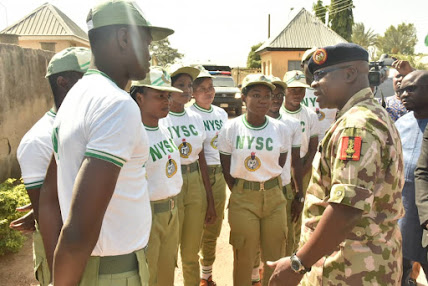 The National Youth Service Corps clarifies: “We are not mobilizing corps members for war.”

On Friday, the National Youth Service Corps denied rumors that it was preparing corps members for war, emphasizing that this was not the case.

Mr. Emeka Mgbemena, the Deputy Director (Publications) of the NYSC national office in Abuja, said in a statement that the corps members’ interests will be protected.

In response to proposals to disband the NYSC system, the scheme’s Director-General, Brigadier General Shuaibu Ibrahim, reportedly stated that corps members were part of Nigeria’s national defense policy and might be mobilized for war if necessary.

However, the NYSC disclosed that Ibrahim never said corps members were being mobilised for war as being reported by some media outlets.

“This is to explain the misinterpretation of the NYSC Director-recent General’s interview with the media, which is currently trending on social media,” the statement reads in part. According to the Director-General, Corps Members are similar to reserve soldiers because of their education, exposure, and sophistication, which allows them to easily adjust to military training.

“He urged them to be focused and patriotic, and prayed that the NYSC spirit would continue on in all Nigerians. General Ibrahim never claimed that Corps members were being called up to fight a war. The Scheme will continue to protect Corps Members’ interests at all times.”