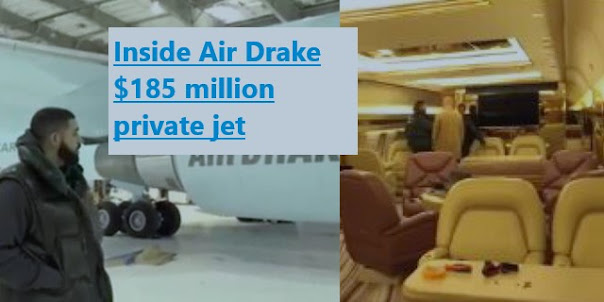 Exclusive footage of Drake’s private jet has been shared by a member of Drake’s entourage, nicknamed “DJ Akademiks.” Drake bought the plane in May of this year. The “Air Drake” aircraft is a Boeing 767. Drake’s luxury ride, which has two separate bedrooms, is shown in the video, which was shared by various blogs. It’s decorated in a 1980s style with lots of gold accents and luxurious cream sofa seats.

The jet is apparently 23 years old and can accommodate around 181 passengers in normal circumstances. Drake is said to have acquired the $100 million plane for free as part of a contract with Cargojet Airways.

The rehabilitation and stripping of the original design were projected to cost between $80 and $100 million, putting the aircraft in the $200 million range.

Drake owns Cargojet Airways publicly under the terms of the agreement. The brand intends to garner awareness and brand recognition when the rapper goes on tour throughout the world.

For a $100 million ride, it’s not a bad deal. Drake has been putting “Air Drake” to work, routinely travelling between the United States and his hometown in Canada, as per the terms of the contract. He’s even vacationed in the Caribbean aboard a jumbo plane numerous times.