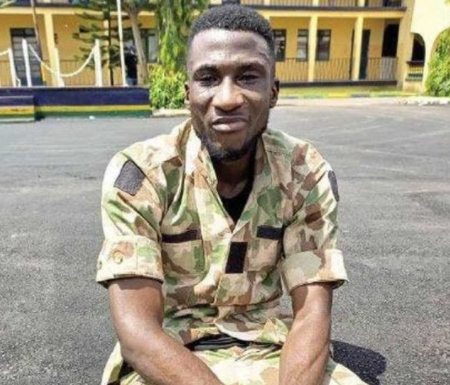 Godwin Chukwuemeka, 35, an Army deserter, has been arrested by the Imo State Police Command for alleged involvement in the state’s April 5 jailbreak.

While arraigning the suspect, Mike Abatam, the Special Adviser on Media to the state Commissioner of Police, stated the defendant was also involved in the attack on the police command headquarters in Owerri.

According to Abatam, the suspect is a “notorious criminal” who has committed numerous terrible crimes in the state.

“Imo command tactical teams raided the hideout of a notorious suspected criminal in the Owerri Nekede area, where one Godwin Chukwuemeka, alias Match and Die, 35, was detained inside the ceiling of his apartment, based on valid intelligence.

The suspect is said to be a Nigerian Army soldier who was dismissed. He admitted to being one of the hoodlums that invaded the Imo State Police Command Headquarters and the Correctional Centre in Owerri earlier this year during interrogation.

The Commissioner of Police urged the command’s officers and troops to maintain the current pace.

He expresses gratitude to the state’s good citizens for their support and calls for an all-society approach to improve security in the state,” According to Abatam.