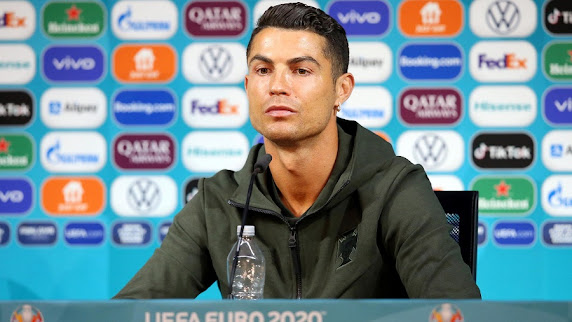 Coca-Cola has loses nearly $4 billion as a result of a gesture made by Portuguese superstar Cristiano Ronaldo during a press conference on Monday.

On Monday, the football legend created a sensation with a gesture involving two Coca-Cola bottles.

While speaking to the press ahead of Portugal’s Euro 2020 group-stage match against Hungary, the Juventus player saw the two bottles of carbonated drinks and pushed them away from himself.

“Agua!” (Water!) Ronaldo exclaimed to the cameras as he grabbed up a bottle of water.

Ronaldo has previously expressed his distaste for sugary soft drinks, claiming that he dislikes his son drinking them.

According to Marca, Coca-Cola’s price before and after Ronaldo’s move resulted in billions of dollars in losses for the company.

The company’s value dropped from $242 billion to $238 billion, according to the Spanish daily, a “brutal 1.6 percent decrease” on the stock market.

Cristiano Ronaldo scored two goals as Portugal began their European campaign with a win against beating Hungary 3-0 on Tuesday.