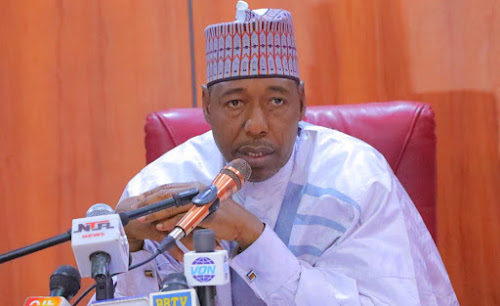 Babagana Zulum, the governor of Borno State, announced on Wednesday that the state has begun closing camps for displaced victims of the northern insurgency.

This was revealed by Governor Zulum during the commissioning and handover of 582 dwellings to returnee IDPs in Auno, a small community in Borno.

Growing prostitution and aid racketeering among Internally Displaced Persons (IDPs) are among the factors that have forced the closing of IDP camps, according to him.

‘The condition in the Borno IDP camps is terrible. Prostitution is on the rise in the camps, as is food smuggling among IDPs. The governor stated, ‘We can no longer allow all of this.’

The governor stated that the state was moving IDPs in compliance with international criteria for displaced persons or refugees resettlement and rehabilitation.

‘The government is transferring IDPs in line with agreed protocols, including the Kampala Convention for the voluntary, safe, and dignified return and resettlement of IDPs,’ he explained.

The government has spent roughly N200 million on the resettlement, according to Governor Zulum. He added that the program was also intended to secure the resurrection of public institutions that had previously been converted into displaced persons’ camps.

He revealed that the Bank of Industry built 82 of the 582 dwellings as a kind of state assistance.

Over 3,000 homes have been transferred from Maiduguri IDP camps, according to Mustapha Gubio, the state’s Commissioner for Resettlement, Rehabilitation, and Reconstruction, who is also the head of the Resettlement Committee.

The 582 houses, according to Gubio, were constructed up of two-room separate apartments for each of the homes assigned to the Auno IDPs.

Some IDPs accepted to be relocated to Auno, a neutral location, while others opted to return to their local government headquarters or rent apartments in Maiduguri with government assistance, according to him.

However, three days after their relocation, several IDPs in Auno had still to be assigned a home.

‘We’ve been sleeping outside. Officials stated that allocations had ended and that we would not be provided apartments. We don’t know what to do anymore,’ one of the IDPs, Goni Ahmad, told the Daily Sun.