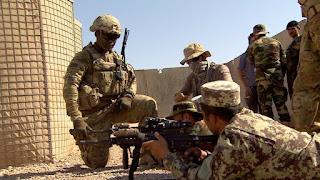 The United States has begun officially withdrawing forces from Afghanistan, signaling the conclusion of what President Joe Biden has referred to as “the never-ending war.”

For nearly two decades, the United States and NATO have maintained a presence in Afghanistan.

However, the withdrawal, which will last until September 11, comes amid rising violence in Afghanistan, with Afghan security forces on high alert for retaliatory attacks.

The Taliban have confirmed that they are no longer willing to negotiate.

Under a deal signed last year between the militants and then-President Donald Trump, foreign forces were to have left by 1 May while the Taliban held off attacking international troops.

Officials told Reuters during this time the Taliban has been protecting western military bases from rival Islamist groups. That has not stopped Taliban attacks on Afghan forces and civilians.

However, US President Joe Biden announced last month that some troops will remain until September 11th, the 20th anniversary of the 9/11 attacks, citing security concerns.
“This breach of principle has opened the way for [Taliban fighters] to take any counter-action it considers necessary against the occupying forces,” a Taliban spokesman said.
He did say, however, that Taliban fighters must wait for instructions.
He also said that Taliban fighters must wait for orders from their leaders before launching attacks. Large-scale attacks could be avoided, according to some experts, if the US set a deadline for withdrawal.
On 11 September 2001, attacks in America killed nearly 3,000 people. Osama Bin Laden, the head of Islamist terror group al-Qaeda, was quickly identified as the man responsible.
The Taliban, radical Islamists who ran Afghanistan and protected Bin Laden, refused to hand him over. So, a month after 9/11, the US launched air strikes against Afghanistan.
Meanwhile, the United States is faced with the logistical dilemma of preparing and departing. According to the Associated Press, the military is taking inventory and determining what will be shipped back and what will be sold as scrap on Afghan markets.
Since then, the US and its allies have struggled to stop Afghanistan’s government collapsing, and to end deadly attacks by the Taliban.
The withdrawal of US troops begins against a backdrop of fierce clashes between the Taliban and government forces, in the absence of a peace deal.