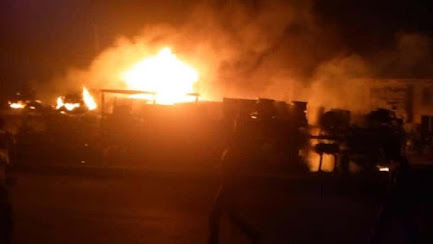 Residents and motorists in the Banire, Ikotun Road, Alimosho area of Lagos state narrowly avoided death in the early hours of Tuesday when a diesel-laden tanker lost control and exploded. The incident happened about 1 a.m., according to a source.

Residents in the area scurried to safety, but there were no injuries or property damage from the fire.

One of the eyewitnesses, Mallam Audu Hassan, a night guard in one of the nearby houses, told newsmen that the tanker’s driver was traveling at a high rate when the accident occurred.

“I was still awake looking around when I heard a horn from a fast-moving truck, and I saw a tanker trying to keep its balance, and all of a sudden, after losing control, it burst into flames.”

“On arrival at the scene by first responders, it was observed that a fully loaded tanker with diesel had a brake failure and subsequently lost control, falling off the road and causing serious injuries,” Osanyintolu said.

“The fire has been successfully subdued by men of the LASEMA Fire service unit, Lagos state fire service, Nigeria Police, and other first responders while damping down is ongoing. “There are no casualties and no property damaged by the blaze.

“An additional post-incident investigation will be conducted, and the debris will be cleared from the roadway.”