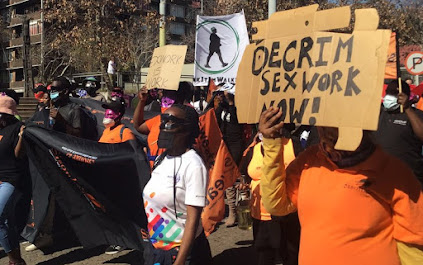 Over 200 sex workers on Thursday marched to the streets of Johannesburg to demand that prostitution be legalized.

Dudu Dlamini, dressed in hiking boots and a long frock, told AFP, “This is what I wear to work.” “There will be no high heels or short skirts.”

“It requires expertise and skills you are unaware of,” she continued.

Constance Mathe, who has been in the sex industry for 16 years, said, “I bought my own house out of sex work.”

However, the country’s prostitution laws hark back to apartheid and make sex employment illegal.

At the protest, Dlamini said, “Sex work is work, not a crime.”

The mob advanced around her, holding banners that said “Where is the crime?” and “Decrim sex work now.”

Police cars flanked some of the protesters, who marched with their faces covered.

“The police harass us and demand money, and sex workers who are harassed by their clients cannot just go to the police station and submit a complaint because they will be arrested for being sex workers,” says Yonela Sinqu of the Sex Workers Education and Advocacy Taskforce (SWEAT).

Prostitutes, according to the organization, are frequently the victims of violence and rape.

According to SWEAT, approximately ten sex workers are murdered each year, but many incidents go undetected.