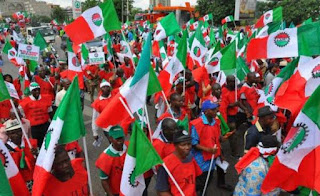 The federal government’s proposals to cut workers’ wages were denounced and rejected by Organized Labour yesterday, with the group warning that such a reckless announcement could set the country on fire. President of the Nigeria Labour Congress, Ayuba Wabba, issued a statement urging President Muhammadu Buhari to summon the Minister of Finance before she sets Nigeria on fire with her irresponsible comments.

The NLC expressed surprise at the assertion attributed to the Finance Minister that the Federal Government was trying to reduce the high cost of governance by reducing the salaries of Nigerian employees.

“It is almost unlikely that the government would consider slashing Nigerian workers’ wages unilaterally at this time.

“It was with great surprise that we read the statement attributed to Minister of Finance, Mrs. Zainab Ahmed, in which she said that the Federal Government was working to reduce the high cost of governance by lowering Nigerian workers’ salaries.

‘’The Minister was quoted as saying this in Abuja at a policy dialogue on corruption and the cost of governance in Nigeria, hosted by the Independent Corrupt Practices and Other Related Offences Commission.” The Minister is also said to have ordered the National Salaries, Incomes, and Wages Commission to review civil servant salaries and the number of federal agencies in the country right away.

“It is unlikely that the government will consider cutting Nigerian workers’ wages arbitrarily at this time.

The question is, “Which pay is the government planning to cut?” “It can’t be the meager national minimum wage of N30,000, which can’t even buy a bag of rice right now.”

The proposed salary cut is definitely not aimed at the minimum wage and subsequent salary adjustments that some callous state governors are now refusing to pay! “It is common knowledge that the numerous devaluations of the Naira in a short period of time, combined with Nigeria’s current high inflation rate, have wiped out the salaries of Nigerian employees across the board.

‘’Nigerian jobs are just hanging on by a thread. Nigerian staff are, without a doubt, walking miracles. As a result, it is heinous for a Minister of the Federal Republic of Nigeria to announce a pay cut for Nigerian jobs at this time. Mrs. Zainab Ahmed’s appeal for wage cuts is tantamount to a call for Nigerian employees to commit “mass suicide.”