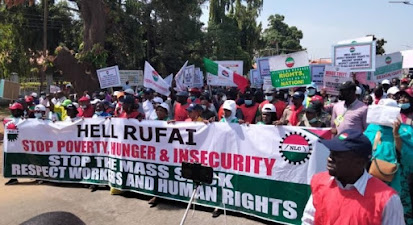 In Kaduna state, armed thugs attacked members of the Nigeria Labour Congress who were protesting. On Tuesday, the incident occurred.

According to reports, the armed thugs even hurled stones at the staff who were protesting. The workers had gathered at the iconic NEPA roundabout in Kaduna’s capital city to continue their protest on day two when thugs stormed the area and began throwing stones and other items.

Many protesters were forced to flee for their lives as a result of the attack. While it is unknown who sent the thugs, the NLC Chairman, Ayuba Wabba, has pointed accusing fingers at Nasir El-Rufai, the state governor. During the protest, Wabba told Channels Television that he informed the DSS after receiving earlier details about the plot to disrupt the protest.

“Today is a very sad day in the history of Nigerian democracy. This is a really early morning.

“They came when we were here, but thank God we chased them away because we had their number. We are Nigerian workers, not criminals, and we do not use thugs,” Wabba told Channels Television. Police personnel used tear gas to disperse the armed thugs. Day two of the NLC is being led by Wabba.