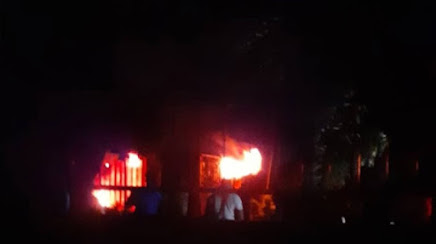 Enugu State police command confirmed the fire incident in a statement by its spokesman, Daniel Ndukwe.

Ndukwe in the statement noted that the fire incident started around 9.40 p.m and was put off by the combined effort of the state fire.

“A distress call was received at the Command’s Udenu Police Divisional Headquarters alleging that a fire had broken out at the INEC’s Obollo-Afor office in the Udenu council district.

“Police operatives attached to the Division rushed to the scene while calling the Enugu State Fire Service office in the area to put out the fire as soon as possible,” he stated.

“Preliminary analysis indicates that the fire, which was put out before it spread to other offices around the building thanks to the joint efforts of the State Fire Service, the Police, and law-abiding people, was triggered by a power surge due to the building’s sudden power supply.”

Mohammed Aliyu, the Commissioner of Police, has ordered a thorough investigation, according to Ndukwe.