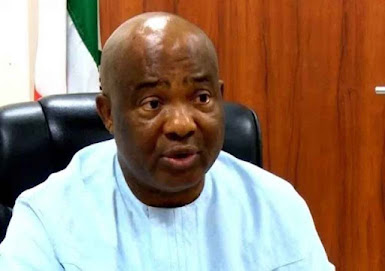 On Tuesday, Imo state governor Hope Uzodimma warned his newly sworn-in appointees that they would be fired if found guilty of any corrupt practices.

Uzodimma gave the speech at the Imo government house in Owerri, where a number of government agencies were holding swearing-in ceremonies.

The governor (Uzodimma’s) stated that his government has a zero-tolerance policy for corruption. Ada Okwuonu, the state’s former deputy governor, was sworn in as chairman of the Imo State Universal Basic Education Board, IMSUBEB.

Hope Uzodimma, the governor of Imo state, warned his newly sworn-in appointees on Tuesday that if they are found guilty of any corrupt practices, they will be fired. Uzodimma delivered the speech at the Imo government house in Owerri, where various government agencies’ swearing-in boards were taking place.

“I have taken precautions to appoint qualified and competent men and women to these critical positions of leadership, through which very important decisions affecting the citizens of Imo state will be made.

You should not be led astray by praise singers who sing your praises solely to confuse and mislead you into thinking that you are the greatest thing God has ever done, resulting in your well-deserved new status. You’ve started your infamous descent into the Hall of Failed Public Officeholders once you fall for this cheap ego decoration.

To succeed, you must maintain vigilance and keep your eyes glued on the ball.” “Let me take this opportunity to inform you and everyone else in this government that if you are found lacking, I would not hesitate to relieve you of your duties. As I previously said, you will be asked to make important decisions on behalf of the government. That means you must be extremely cautious and careful about everything you do, Uzodimma said.