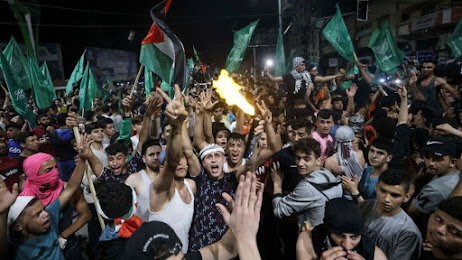 In the Gaza Strip, Israel and the Palestinian militant group Hamas have agreed to a truce.

The ceasefire started early on Friday, ending 11 days of fighting that claimed the lives of over 240 people, the majority of whom were in Gaza.

Palestinians flocked to the streets of Gaza shortly after the cease-fire was declared, with a Hamas official warning that the group’s hands were “on the trigger.”

The dispute has been declared settled by both Israel and Hamas.

President Joe Biden of the United States said the truce provided a “true opportunity” for change.

Massive crowds of Palestinians took to the streets in cars and on foot to celebrate shortly after it began at 02:00 on Friday (23:00 GMT on Thursday). Drivers honked their horns in Gaza, as mosque loudspeakers proclaimed “the triumph of the resistance.”

Israel’s military later announced that almost all emergency limits on travel around the country would be lifted.

After weeks of rising Israeli-Palestinian tension in occupied East Jerusalem, which resulted in clashes at a holy site revered by both Muslims and Jews, the fighting began on May 10th. After warning Israel to leave the site, Hamas began firing missiles, prompting retaliatory air strikes.

The Israeli military claims that militants fired over 4,300 rockets at its territory, and that it hit over 1,000 militant targets in Gaza.