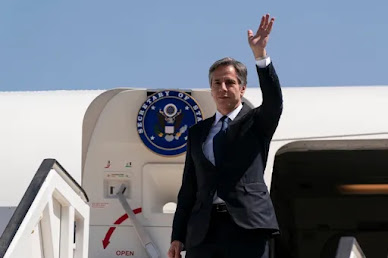 On the second day of a regional tour, US Secretary of State Antony Blinken arrived in Egypt to bolster a ceasefire agreement reached last week between Israel and Hamas, the Palestinian faction in charge of the besieged Gaza Strip.

During an 11-day Israeli attack that began on May 10, at least 248 Palestinians were murdered, including 66 children, and almost 2,000 others were injured in the coastal enclave.

During that time period, rockets fired from Gaza by Hamas and other armed organizations killed at least 12 people in Israel, including two children.

The senior US envoy pledged millions of dollars in aid to Gaza’s rebuilding efforts, which he said the US would “guarantee” would not benefit Hamas, which Washington considers a “terrorist state” with which it has no direct contact.

Blinken was scheduled to meet Egyptian President Abdel Fattah el-Sisi in Cairo before traveling to Jordan to meet with King Abdullah II.

Egyptian mediators have been in charge of the talks.

In a phone chat with el-Sisi on Monday, US President Joe Biden praised Egypt’s “successful diplomacy” and coordination with Washington in achieving the truce.

The Biden government has credited its own “quiet,” behind-the-scenes approach for ending the bombardment, dismissing allegations that the US did not take a tough enough stance with Israel in the early days of the escalation, which included the US opposing a UN Security Council joint statement calling for a ceasefire four times.