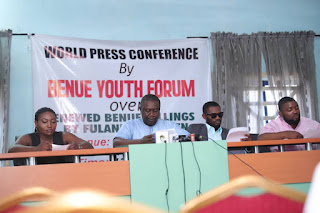 Benue Youth Forum, BYF, has called on the Director General of the Department of State Security Services, DSS and the Inspector General of Police to arrest the leadership of Miyetti Allah as sponsors of attacks on Benue communities.

President of BYF, Comrade Terrence Kuanum in a World Press Conference today in Makurdi, berated the Senior Special Assistant to the President on Media and Publicity, Garba Shehu for failure to address issues raised by Governor Samuel Ortom and his refusal to caution herders over attacks on Benue.

The BYF President who lamented the displacement of Internally Displaced Persons and killing of over 70 in Gwer West, Guma and Makurdi by militia herdsmen in a period of two weeks, warned Benue sons taking sides with the herdsmen to immediately apologise to the Governor and victims of herders attacks.

“In the last two weeks, the people of Benue State have witnessed several unprovoked attacks on communities in Gwer West, Guma and Makurdi local government areas by the Fulani herdsmen resulting to the death of 70 persons with many injured.

“On the 26th of April 2021 the same Fulani herdsmen attacked the Abagena IDP camp and killed seven persons with 15 critically injured.

“Governor Samuel Ortom was at the scene of attack at Abagena IDP camp and condemned the attack on his people and also called on President Mohammadu Buhari to rise up and protect his citizens before everyone will be consumed by the crisis that has now engulfed the entire nation. 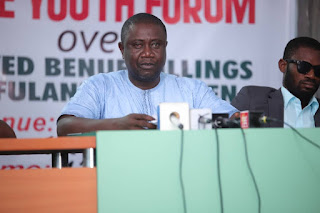 “Expectedly, on the 29th of April 2021 we read a press statement from Garba Shehu spokesman of the President vilifying Governor Samuel Ortom for calling on the President to act more sincerely and fairly to address security challenges in the country.

“It should be recalled that Governor Samuel Ortom exposed the perpetrators of insecurity in the country (Miyetti Allah) and called for their arrest and persecution. He also reminded the president that his body language appears to be an endorsement of the Fulani armed killers; a disturbing scenario that has made Nigerians to suspect that the Buhari presidency is protecting a section of the country.

“Unfortunately Garba Shehu hurriedly went to the press without objectively addressing the issues raised by Governor Samuel Ortom in his patriotic call on the president to act fast and declare a state of emergency on security and also call for a National Security Summit. The media aide did not bother to caution the herders to stop the killings.

“The National Economic Council has laid to rest the issue of RUGA and Cattle Colony in Nigeria after the realization that Nigerians are against the policy. It was amazing how Garba Shehu in his drive to please his paymaster, saw the rejection of the RUGA and Cattle Colony by Benue People as a reason for renewed killing of our people.

“We have been on this road before with Garba Shehu and his cohorts the Miyetti Allah Kautal Hore and other killer headsmen and we know their intentions but the resolve of Benue people remains unflinching that there is no land for RUGA and Cattle Colonies in the State.

“The agenda of these groups is anchored on conquest of more lands for their cows. In order to carry the occupation plot in a hitch-free fashion, they have resorted to using presidency to blackmail Governor Samuel Ortom and the Benue people. The likes of Garba Shehu are being used by drivers of the evil occupation agenda to churn out fake narratives in the media. This explains the unwarranted provocation which started with attacks on our communities and then the garbage spilled by Garba. He is a Fulani megaphone using the machinery of state to push a devilish plot of subjugation.

Garba Shehu is one of those close to the President who have caused more divisions among Nigerians on ethnic and religious lines than any other administration before Buhari’s. Shehu and his likes celebrate each time another Fulani man is given a juicy appointment by Buhari to the chagrin of other ethnic groups. The nepotism being witnessed under this administration is unprecedented, yet, the likes of Garba will never advise the President to retrace his steps before he plunges the country into deeper crisis.

“We must make this loud and clear that the entire Benue State is fully mobilized to defend its laws and land against any threat posed by members of Miyetti Allah Kautal Hore and any other violent Fulani group. We are a peace loving people but our peaceful and hospitable disposition should not be taken as fear or lack of courage. No part of Benue will be given for RUGA or Cattle Colony. President Buhari and his aides should better be told so.

“The Federal Government through the National Emergency Management Agency NEMA should immediately rehabilitate the over 1million people in various IDP camps to enable them return to their ancestral homes. The 10 billion Federal Government promised to release for resettlement of those affected by the crisis is yet to be redeemed. The Buhari administration should fulfill its promise now to avoid further hardship and attacks on victims of herdsmen attacks in Benue.

“We are solidly behind Governor Samuel Ortom and his administration to continue with the enforcement of the ranching law of the state. Those who want to rear livestock in Benue State should do so by ranching their animals.

“Let me on behalf of youths of Benue State send a strong message of caution to sons of the State who have chosen to be willing tools in the hands of our enemies such as one randy sacked university lecturer called Aondona Mkor who has taken sides with Fulani herdsmen against our people. Mkor’s latest outing was to castigate Governor Ortom for speaking out against injustice being visited on Nigerians by the Federal Government.

“We view such conduct as a direct assault on our collective sensibilities and a dance on the graves of those killed by Fulani herdsmen. Mkor or whatever he calls himself and his employers should know that no one is above the general interest of the State. We advise him to tender a public apology to the Governor and victims of Fulani herders’ attack in Benue for his unguarded utterances within 24hrs.

“We urge the Inspector General of Police and the DG of DSS to immediately arrest the leadership of Miyetti Allah as chief sponsors of violence in Benue State.

“The international community is hereby invited to beam its searchlight on Benue to unravel and prevent the organized attacks on our communities by Miyetti Allah militia and other Fulani groups.”