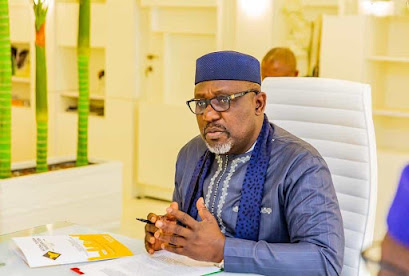 Rochas Okorocha, the former governor of Imo state and senator representing the Imo West Senatorial District, has said that after eight years in office, he became poorer.

On Sunday, May 16, Okorocha said this while appearing as a guest on Channels Television’s Sunday Politics. People seem to have forgotten, according to the former governor, that he was a good individual before becoming governor.

Okorocha also challenged everyone with proof that he is corrupt and mismanaged Imo State funds while in office to come forward.

“I challenge someone to show me a property purchased with government funds. I believe people have forgotten who I was before I became governor of Imo State; I believe they have absolutely forgotten.

In reality, being governor made me even poorer than I had been earlier. I’m not sure if I bought any property in Abuja; there isn’t any.”

According to the senator, the hotel connected to him is owned by his wife and serves as a funding source for their foundation. Okorocha was perplexed as to how he might have stolen the State’s “meager” monthly allocation from the federal government.

The ex-governor, speaking about his ordeal after being summoned by the Economic and Financial Crimes Commission, EFCC, said the commission invited him based on a report written by others.

“The invitation was based on a comment made by someone, but I told them that I couldn’t come because the matter was already in court, and once a matter is in court, we can’t do anything about it.”

The Imo state government has taken me to court on the same matter, and we are at the Federal High Court in Abuja, so I told EFCC I couldn’t be named, so I was arrested, and I made my statement,” he said. Okorocha also said that he does not see the EFCC as a witch-hunting agency, but that they acted on a report or petition written on citizens by others.