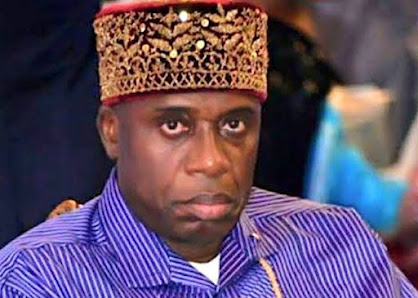 The Minister of Transportation, Rotimi Amaechi, has instructed the Nigerian Railway Corporation, NRC, to arrest vandals and buyers of rail equipment ahead of the line’s commissioning. Amaechi said this yesterday in Ibadan during an inspection tour of the Lagos-Ibadan railway line.

“I don’t know why some Nigerians are the way they are,” the Minister said, lamenting the vandalism of rail facilities along the Warri-Itakpe line. I’ve instructed the NRC’s Managing Director to arrest the equipment’s buyers. Arresting the vandals isn’t enough. It is comparable to those who argued that the National Assembly does not prosecute those who pay ransom.

That law was first passed by the Rivers State House of Assembly when I was a speaker and the reason is, that, when there is no demand, there will be no supply. “If we don’t pay ransom, they will be tired and they will stop. Similarly, if they don’t buy those metals, nobody will steal them.” Amaechi, who also charged the judiciary with devising methods to speed up the delivery of justice, said:

“We must approach the courts to provide a court that can quickly dispense justice so that people are sent to prison early enough to discourage others, and we will also urge our governors to create jobs,” says the group. He assured Nigerians that the project would be ready for commissioning soon, noting that all 11 stations along the route had been completed to an 80-90 percent stage.

The projects will be completed in the next two weeks, according to the Minister. “I am hopeful that the President’s Office would approve the commissioning day in June. We’re not completely prepared, but we’re hoping to be by the time they send us a date in the next three weeks.