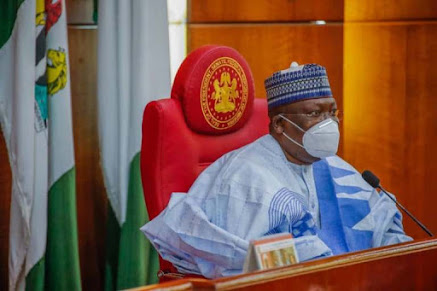 Senate President Ahmad Lawan has urged state governors and other elected officials against adopting nationalist protests or calling for the country to be restructured.

Lawan said this while answering questions from State House correspondents in Abuja on Thursday. He added that while he was not against restructuring, elected officials should not be among those pushing for it. State governors, he claims, must first restructure their own states before calling for federal reform.

“Many of the demands for secession or reform are legitimate calls,” he said, “even though I never believe that anyone calling for secession means well or is misguided.” However, I believe that when anyone suggests that we improve our current structure, it is a sincere request.

“However, I believe that as elected officials, those of us who were elected should not be at the forefront of calling for this kind of stuff, because even though you are a governor, you are supposed to be working hard in your state to ensure that the restructuring you are calling for at the federal level is also achieved in your state.

“This is because whatever you accuse the federal government of, you might be accused of the same thing in your own state. So, we’re supposed to make sure that our processes at the federal, state, and even local levels function for the people, and that we encourage people to engage in politics so that everyone feels like he has something to say can say it.

Nigerians, he said, must come together regardless of their religious, racial, or political affiliations to find long-term solutions to the country’s problems. As a result, he urged all elected leaders at all levels of government to avoid primordial sentiments that could lead to social discord and dissatisfaction among Nigerians.