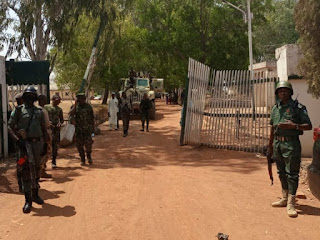 Ambulances with sirens blare as they carry Nigeria’s freed college students. On Wednesday, the students arrived at the Kaduna State Police Headquarters.

In a tweet, President Muhammadu Buhari announced the 30 students’ release.

“We are relieved that they have been made public… We would like to express our gratitude to everyone who helped us achieve this happy result “, he explained.

The circumstances of the students’ release, as well as the potential ransom, were not disclosed by Nigerian authorities.

Families of the Kaduna students who were kidnapped protested in Abuja this week, demanding their freedom.

The local population is terrorized by these armed gangs. They invade villages, steal animals, and abduct large groups of people for ransom.

On March 11, a total of 39 students were kidnapped from their university in Kaduna, Nigeria’s northwestern capital.

In the weeks following the assault, security forces rescued an initial group of ten students. For almost two months, the remaining 29 students were kept hostage.