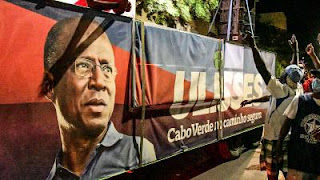 Cape Verdeans have placed their confidence in outgoing Prime Minister Ulisses Correia e Silva to turn around the archipelago’s economy, which has been heavily impacted by the coronavirus pandemic, by granting a major victory to his center-right formation in Sunday’s legislative elections, according to near-complete results released overnight.
The 58-year-old president, a former senior executive of the Bank of Cape Verde, ex-minister, and ex-mayor of the capital Praia, has been in power since 2016, and his victory has been celebrated by his supporters in front of his party headquarters and throughout the region.
“The triumph of Cape Verde is a significant victory. We were able to persuade the Cape Verdeans of the government’s correct course of action during a challenging time, as well as the correctness of our future proposals “Correia e Silva expressed his thoughts on the subject.
According to the results of the national electoral process, his Movement for Democracy (MpD) secured 36 of the 72 seats in the National Assembly.
When the results of the last three diaspora seats are known, the party, which had 40 elected members in the previous assembly, should expect to gain at least 37 deputies, which is equivalent to an absolute majority.
In any case, as in 2016, the center-right formation is ahead of Janira Hopffer Almada’s PAICV (socialist) with 29 seats.
As a result, the former single party’s nominee, a 42-year-old former minister, loses her bid to restore the historic left-wing formation to power and become the first woman to lead the former Portuguese colony’s government.
She accepted her loss in front of her supporters, thanked the outgoing prime minister, and declared her resignation from her party’s leadership.
The elections took place at a time when the epidemic was wreaking havoc on the country’s economy.
Last year, the archipelago of 550,000 people situated about 600 kilometers off the coast of Senegal, which is heavily reliant on tourism (which accounts for 25% of its GDP), experienced a historic 14.8 percent decline.
In total, the country has reported 20,254 Covid-19 infections and 190 deaths, which are relatively low figures as compared to the situation elsewhere in the world.
According to estimates for the period April 5 to 11, it is currently experiencing a significant surge, with an incidence rate of 189 cases per 100,000 population, the highest in Africa.
Both leading candidates have vowed to offer vaccines to a significant portion of the population and diversify the country’s income in order to improve the economy.
Ulisses Correia e Silva, who projects a new, grassroots picture, also has more experience than his opponent.
“He has demonstrated his abilities, he has proved himself, and it was vital to maintain a sense of stability in this challenging time that is the Covid,” Cleidiria Fernandes Moreira, a young voter of 25 years dressed in a red T-shirt, the party’s color, said after the announcement of his victory.
According to these preliminary results, the Cape Verdean Independent and Democratic Union (Ucid, Christian Democrat) came in fourth, well behind the two main parties. Three other minor parties running for office will not be elected.
Since 1991’s free elections, the small West African nation has been regarded as a model of democracy on the continent, with no incidents of violence recorded.
The President (Jorge Carlos Fonseca, MpD) acts as an arbitrator in a semi-parliamentary structure in which the Prime Minister dominates the government.