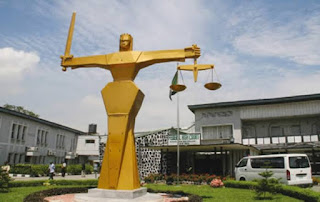 Courts in Makurdi have been closed indefinitely after the commencement of a strike by the Judiciary Staff Union of Nigeria, JUSUN, over the state executive’s failure to enforce financial autonomy for the judiciary.

By 8 a.m., members of the union, which included men of the bar, and judiciary workers had closed all of the courthouse gates and put green leaves on them to prevent entry.

Mr Justin Gbagir, Chairman of the Nigeria Bar Association Makurdi branch, told reporters at the gate of the State High Courts premises in Makurdi that the strike is in accordance with the NBA’s national leadership’s directive that members join JUSUN for a nationwide strike starting today.

Mr Gbagir claimed that the strike was necessary as a result of the Executive arm of government’s failure, especially at the state level, to enforce the financial autonomy given to the judiciary as stipulated by the Constitution and President Muhammadu Buhari’s Executive Order No. ten signed on May 20, last year.

The Leader of the Bar, who argued that the judiciary, as one of the arms of government, should be granted the same constitutional rights as the other arms, bemoaned the fact that it is forced to rely on money from the executive to support its operations, saying that this is a violation of the rule of law that has resulted in infrastructure degradation and poor welfare.

He did admit, however, that the strike would have a negative impact on the timely administration of justice, noting that offenders and litigants’ trials would be postponed, slowing down attempts to decongest detention facilities.

As a result, the NBA Chairman announced that the organization has agreed to meet with the judiciary staff to discuss the strike action in the hopes of suspending it.

As a result, the NBA Chairman stated that the bar has agreed to meet with Judiciary Staff to review the strike action in the hopes of suspending it soon to allow for discussion, while also urging Governor Samuel Ortom to act quickly and domesticate judicial autonomy in order to make history as the first state governor to do so.

The chairman of JUSUN’s State Branch, Mr Terlumun Aba, said they were participating in the strike on the National Secretariat’s other employees, while the National Auditor, Friday Ochai, said the strike was taking place across the country and that he was representing the national body to track compliance.

Meanwhile, many peasants are confused and frustrated as a result of the strike.

Meanwhile, many people have been confused and frustrated by the strike, as they have gone to court to conduct formal or informal transactions only to be stopped at the gate and forced to turn around by angry striking union membersmembers.