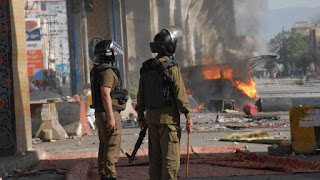 In the face of violent anti-French demonstrations across Pakistan, France has advised all of its people to leave the country temporarily.

The French embassy in Pakistan issued a statement warning of “significant threats to French interests in Pakistan,” claiming that protests were spreading across the region.

This week, two police officers were killed in fresh clashes with demonstrators.

After France defended the right to display cartoons of the Prophet Muhammad, the demonstrations began months ago.

Following the beheading of a teacher who displayed such cartoons during a class discussion in October of last year, French President Emmanuel Macron defended freedom of speech vehemently.

This sparked outrage in parts of the Muslim world, including Pakistan, where a boycott of French products was called for.

In Islam, depictions of the Prophet Muhammad are generally considered taboo, and Muslims find them particularly offensive.

The protests erupted this week after the Pakistani government arrested Saad Hussain Rizvi, the chief of the hardline political party Tehreek-e-Labaik Pakistan (TLP), which has demanded that the French ambassador be expelled.

Thousands of TLP supporters took to the streets in Pakistan to condemn Mr Rizvi’s arrest and the Pakistani government’s decision to ban the group.

Rubber bullets, tear gas, and water cannons were shot at the protesters by police.

Previously, the TLP has drawn large crowds to protest blasphemy issues. Those found guilty of insulting the Prophet Muhammad in Pakistan could face the death penalty.

Pakistani Interior Minister Sheikh Rashid Ahmed told a news conference on Wednesday that the country was “in favor of defending the Prophet’s honor,” but that the TLP’s demands “may have depicted Pakistan as a terrorist organization.”

“Demonstrations are increasing throughout the world,” the French embassy in Pakistan said on its website on Thursday.

“In this sense, and in light of the grave threats to French interests in Pakistan, French nationals are advised to leave the country temporarily through established commercial airlines.”