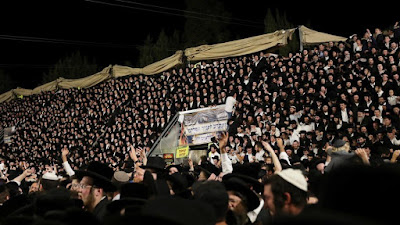 In a crush at a crowded religious festival in Israel’s north-east, at least 44 people were killed.

At the Lag B’Omer festival, which takes place every year at the foot of Mount Meron, dozens more people were injured.

Prime Minister Benjamin Netanyahu called it a “heavy tragedy” and expressed his condolences to the victims.

The festival drew tens of thousands of Orthodox Jews, making it Israel’s largest event since the coronavirus pandemic started.

Many restrictions have been lifted as a result of the country’s effective vaccination program, but health officials have cautioned about the possibility of Covid-19.

Initially, it appeared that a building had collapsed at the site, but emergency officials later stated that a crush had occurred at about 01:00 local time (22:00 GMT Thursday).

According to police reports, the incident began when a few attendees stumbled on the stairs, causing hundreds more to fall.

One witness told the newspaper, “It happened in a split second; people just dropped, trampling each other; it was a tragedy.”

As the incident occurred, videos posted online show thousands of people trying to escape the chaos through a narrow passageway.

When loudhailer announcements urged the crowds to disperse, one pilgrim mistook it for a bomb warning. The site was then ordered to be evacuated by police.

“No one expected this to happen here,” he told Channel 12 television. “A great light became a deep shadow, and rejoicing became mourning.”

Several ambulances arrived on the scene, and medical personnel laid bodies out on the ground under foil covers. Helicopters transported the wounded to hospitals, and search-and-rescue troops were also deployed, according to the military.

Officials said at least 103 people were wounded, with 38 of them in critical condition on the scene.

“MDA is fighting for the lives of hundreds of injured, and will not give up until the last victim is evacuated,” according to a tweet from Magen David Adom (MDA), Israel’s national emergency service.

Witnesses said paramedics were seen performing CPR on some of the children who were caught up in the tragedy.

Earlier in the day, officials said they couldn’t enforce coronavirus restrictions because of the weather.