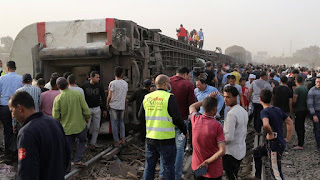 Eleven people were killed and 98 were injured in Egypt’s second deadly rail accident in a month.
On Sunday afternoon, four carriages of a train derailed near Toukh as it traveled north from Cairo to the city of Mansoura.
The reason for the incident was not immediately clear, but President Abdul Fattah al-Sisi ordered an investigation.
According to the rail authority, the driver and his assistant, as well as eight station officials, were detained.
Egypt’s railway system has a poor safety record, which many observers attribute to successive governments’ lack of investment and poor management.
A train derailed last Thursday in Sharqiya province, north-east of Cairo, injuring 15 people.
On March 26, at least 19 people were killed and 185 were injured when two trains collided in Sohag province, south of the capital.
Prosecutors claim that, “contrary to their claims,” the driver of one of the trains and his assistant “were not in the driver’s cabin” before the crash.
They also claimed that the assistant of the other train, which was stopped, and a control tower guard were involved. 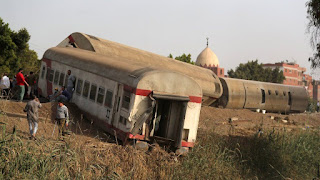 Transport Minister Kamel al-Wazir, a former general appointed following a deadly rail accident in 2019, has stated that Egypt has a “human element problem” and has promised to put in place an automated rail network by 2024.