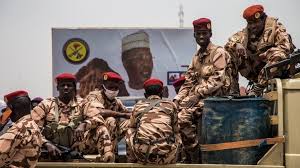 The demonstrations have resulted in the deaths of at least two people.

Anti-junta demonstrators attacked a bus in the capital, killing a woman, and a man was killed during protests in the country’s south.

In N’Djamena, protesters set fire to tyres, prompting police to use tear gas.

On April 19, long-time leader Deby was assassinated while visiting troops fighting rebels. The president’s uncle, Mahamat Idriss Deby, was elected the new head of state by a military transition.

Several opposition lawmakers and civil society organizations described the change as a coup and urged Chadians to take to the streets in protest. The army named civilian politician Albert Pahimi Padacke as Prime Minister on Monday, but the opposition also rejected.

“In Chad, we are sick of monarchy. We’re exhausted, and all we want is for France to solve our problem “Sandra, a protester in the capital, said.

The transition council said it will hand over power in 18-months time when it takes the country to an election.

Chad has been a key ally to the West in the fight against jihadism in the region. But the military council has come under international pressure with France, the former colonial ruler, and several of Chad’s neighbouring, calling for a civilian-military solution.

The African Union has also expressed “grave concern” about the coup attempt.

Chad is home to a French military base where the region’s counterterrorism operations are based.

Chad has emerged as a key player in the war against militant groups and jihadist movements in recent years. The central African country is deeply involved in the Lake Chad basin and also plays a key role in the region’s growth.

Chad’s new military transitional government said on Sunday it will not negotiate with the rebels blamed for killing the country’s president Idriss Deby.

In a televised statement, the military spokesman, Gen. Azem Bermandoa Agouma, said the rebels were seeking to collaborate with “several groups of jihadists and traffickers who served as mercenaries in Libya.”