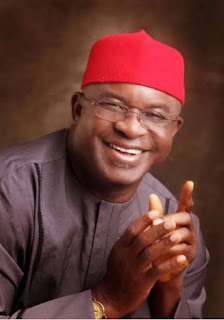 Governor Ortom describes Senator Mark as a statesman, seasoned administrator and a bastion of democracy who has stood for the rule of law, equity and justice.

He notes the numerous acts of philanthropy and other humanitarian interventions Senator Mark has made which have had positive impact on the lives of the people.

The Governor states that the wealth of experience the former Senate President has gathered over the years has been quite useful for the development of the country, especially in sustaining peace and development.

Governor Ortom recalls the laudable successes Senator Mark recorded while pioneering affairs of the Senate which brought about parliamentary stability and a cordial working relationship between the National Assembly and other arms of government.

“Senator David Mark is a true patriot and leader who has over the years, made selfless contributions to the peace, unity and development of the country. As he celebrates his 73rd birthday anniversary, I extend very warm felicitations to him on behalf of my family, the government and people of Benue State. It is my prayer that Almighty God keeps and blesses him with good health as he continues to play a fatherly role for the benefit of the state and country at large.”