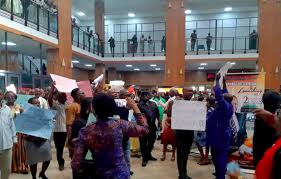 The Parliamentary Staff Association of Nigeria (PASAN), National Assembly chapter, has threatened to go on strike over unpaid allowances and other constitutional entitlements, heating up the corridors of the National Assembly.

PASAN issued the threats in a letter dated March 18, 2021, and signed by the branch chairman, Comr. Sunday Sabiyi, to the Clerk of the National Assembly.

It gave a 14-day deadline for the National Minimum Wage and 22-month arrears, hazard allowance, and pending promotion arrears, among other items.

After the association’s previous 21-day ultimatum expired without the authorities acting on their demands, Comr. Sabiyi said the organization was pressured to issue this threat.

“The Clerk of the National Assembly is hereby given another 14-day ultimatum to fully enforce our demands, which will run from March 18 to March 31, 2021.

“Without that, we will be unable to ensure good industrial relations in the National Assembly Service,” he added.