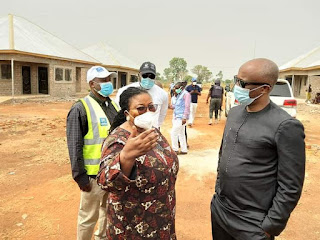 Governor Samuel Ortom’s efforts to provide for the Benue Internally Displaced Persons (IDPs) living in the camps and other host communities in Benue State have been applauded by the United Nations Development Programme (UNDP). 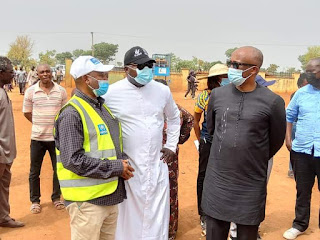 Mohamed Yahya, the UNDP’s Resident Representative in Nigeria, confirmed this during a visit to Gbajimba, Guma Local Government Area, Benue State, to inspect the construction of 80 bedroom semi-detached shelters.

He mentioned that the Governor has done a lot to resolve the plight of the IDPs, noting that he has also visited the Gbajimba IDPs Camp.

He explained that the “PEACE SETTLEMENT” initiative, which focuses on “Transitioning From Humanitarian Relief To Long-Term Development: Addressing The Herdsmen-Farmers Conflict in Nigeria,” is part of their effort to help the most vulnerable, the IDPs.

In his remarks, Samuel Ortom, the Executive Governor of Benue State, who was represented by Professor Magdalyne Dura, his Special Adviser on SDGs/Development Cooperation and NEPAD, praised the UNDP for the projects, which she said would go a long way in addressing the plight of the IDPs by providing shelter for them, while appealing to the Federal Government to beef up security to allow the ID cards to be issued, thanked the UNDP.

Dr. Emmanuel Shior, Executive Secretary of the Benue State Emergency Management Agency, thanked the UNDP and other collaborators for their assistance in resolving the plight of Benue IDPs and Cameroonian Refugees in Kwande. The Governor, he said, has worked diligently to provide relief to the needy through his agency.