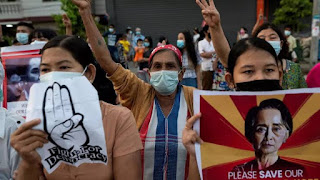 At least four more people have been killed, according to witnesses and local media, bringing the total death toll to 80.

On Sunday, anti-coup protesters continued their demonstrations as Myanmar entered its seventh week of military rule, with a group of MPs in hiding urging them to drive with “invincibility” to resolve the country’s “darkest moment.”

Witnesses and local media reported that a young man was shot and killed in Bago, a town near Yangon’s commercial capital.

According to Kyaw Swar, a Bago city resident and protester, a fellow demonstrator was killed by a gunshot and several others were wounded.

He said, “Tension has risen.” “People would not stop demonstrating, and the military is attempting to put a stop to it.”

Another protester was killed in the northeastern town of Hpakant, according to the newsmen.