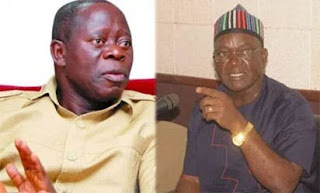 Comrade Adams Oshiomhole, the former National Chairman of the All Progressives Congress, APC, today retracted comments he made on Governor Samuel Ortom on July 27, 2018.

Today, March 18th, 2021, the retraction was published in national newspapers.

The retraction is as follows:

On the 27th of July, 2018, at the National Headquarters of the All Progressives Congress (APC), and specifically in my capacity as Chairman of the Party at the time, I discussed various national issues as well as some events that occurred in Benue State, including His Excellency, Dr. Samuel Ortom (Executive Governor of Benue State ), from the APC earlier that day to the Peoples Democratic Party.

During the press conference, I made some remarks about Dr. Ortom based on facts that I have since discovered to be inaccurate and unfounded.

Mr. President, The remarks I made at the press conference humiliated, defamed, and profoundly aggrieved Dr. Samuel Ortom, resulting in litigation.

Governor Samuel Ortom is a dear friend and brother with whom I share a lot of things in common, including mutual respect. 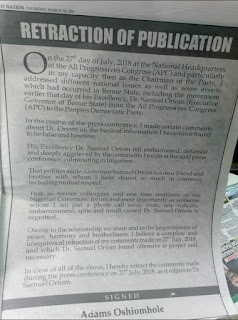 That any mockery, humiliation, malice, and insult caused Dr Samuel Ortom is regretted as former colleagues and one-time members of the Nigerian Governors’ Forum, and most importantly as someone from whom I am just a phone call away.

Because of our friendship and in the greater interests of peace, harmony, and brotherhood, I believe a full retraction of my remarks made on July 27, 2018, which Dr Samuel Ortom considered offensive is appropriate and required.

In light of the above, I hereby retract my remarks regarding Dr. Samuel Ortom made during the press conference on July 27, 2018.