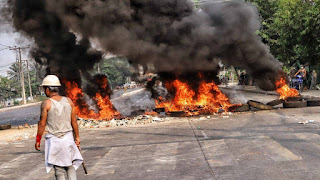 Security forces in Myanmar have killed hundreds of civilians on the deadliest day since the military takeover last month, according to activists.

The Assistance Association for Political Prisoners (AAPP) had counted at least 89 deaths, including children, as of early evening local time.

Protesters ignored warnings and took to the streets on Armed Forces Day, triggering the deadly crackdown.

Officials from the United States, the United Kingdom, and the European Union have all condemned the violence.

In a quote, British Ambassador Dan Chugg said, “The security forces have disgraced themselves by shooting unarmed civilians.”

With the new deaths, the total number of people killed in the suppression of demonstrations since the coup on February 1 has reached 400.