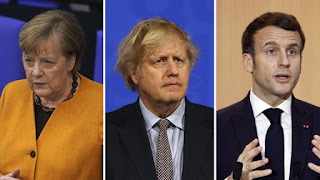 More than 20 world leaders, including Prime Minister Boris Johnson, have called for a new global agreement to help the world prepare for potential pandemics.

The leaders, including the German chancellor and the French president, said Covid faced the greatest challenge since World War II in a newspaper report.

“Nobody is safe until everybody is safe,” they said, citing the pandemic as an example.

Before the UK could export vaccines, Business Secretary Kwasi Kwarteng said the country would need a surplus.

The 24 leaders argue in the Daily Telegraph and other publications such as Le Monde in France and El Pais in Spain that a treaty similar to the one signed after WWII is required to establish cross-border cooperation.

“The objectives were clear: to bring countries together, to dispel the temptations of isolationism and nationalism, and to resolve problems that could only be met by working together in a spirit of unity and cooperation, such as stability, prosperity, health, and security.”

Countries must now “be better prepared to forecast, avoid, track, evaluate, and affect” in the same spirit, the leaders said.

They believed that a new treaty would help in the creation of improved systems for warning citizens about possible pandemics, as well as the exchange of data and distribution of vaccines and personal protective equipment.

“Other pandemics and major health crises will arise. This threat cannot be addressed by a single government or multilateral organization. The question isn’t whether it will happen, but when.

“The Covid-19 pandemic has served as a sobering reminder that no one is safe until everybody is safe.”

“At a time when Covid-19 has manipulated our vulnerabilities and tensions,” the letter continued, “we must take this opportunity as a global community to come together for peaceful co-operation that stretches beyond this crisis.”