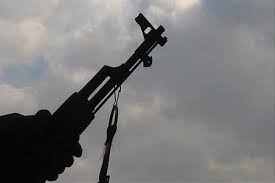 According to sources in the area  the gunmen launched the attack in the early hours of Tuesday, burning and pulling down houses while also shooting at fleeing villagers on sight.

The source revealed further that in the midst of the shooting, some villagers ran to the Catholic Church where the 6am Holy Mass had just ended with Rev Fr. Fanen beckoning on them to enter the church the gunmen who were pursuing those fleeing for refuge inside the Catholic Church reportedly chased them to the church, sporadically shooting at them and in the process killed many of them including Fr. Fanen.

The PPRO stated further that the Corpse of the murdered Catholic priest has been deposited at the General Hospital in Kastsina-Ala, while a joint operation of Police and other security agencies are on the trail of the hoodlums.

Meanwhile,the police is yet to confirm as to how many lives were lost during the attack.