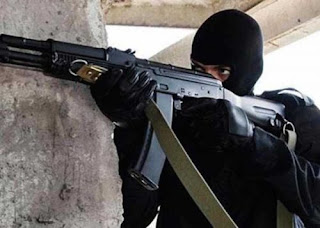 Bandits attacked traders at Abaji market in Katsina-Ala Local Government Area in Benue State, killing one person and injuring nine others.
The attack happened about 6.30 p.m., when traders were returning from the market, according to DSP Sewuese Anene of the Benue State Police Command.
She stated that the bandits, who disguised themselves as buyers, began shooting indiscriminately and killed one person while injuring nine others.
According to the Police Public Relations Officer, PPRO, a joint operation of police and other security agents returned fire and repelled the bandits to the forest with gunshot wounds, where they are cordoned off.
More patrol teams have been dispatched to the scene of the incident to assist officers already on the ground, according to the police public relations officer, who also stressed that a cordon and search operation is underway.
Meanwhile, the deceased’s body has been deposited at the Abaji Primary Health Care Center, while the injured are being treated at the General Hospital.